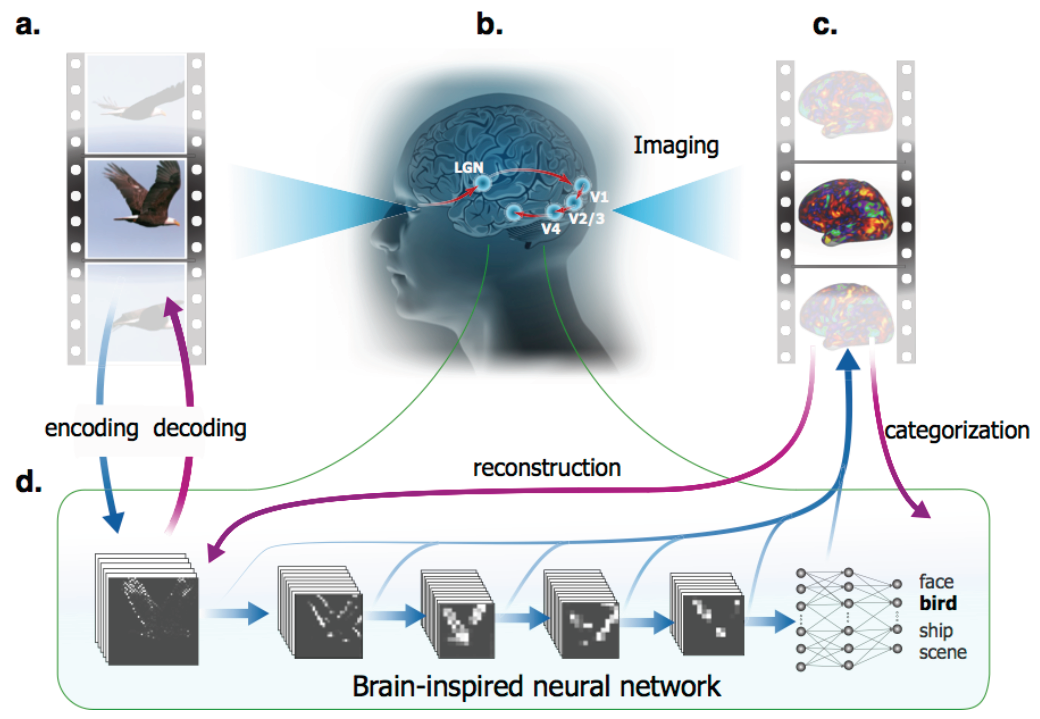 The deep net was similar to AlexNet in architecture and had been trained to classify static images. The model processed each frame separately through its purely feedforward hierarchy and had no mechanism for recognising visual motion and more complex visual dynamics. Nevertheless, it did quite well at explaining visual fMRI responses during movie viewing. This is perhaps expected based on previous studies of fMRI responses during movie viewing (Hasson et al. 2001), which showed that category-selective regions respond as expected during movie viewing, when their preferred categories are present in the scene.

The authors conduct a series of original and well-motivated analyses, including decoding and deconvolution, to explore the degree to which the deep network captures the dynamic representations at multiple levels. Overall, this is a technically excellent study providing further evidence that deep feedforward neural networks constitute good models of ventral-stream responses, with layers roughly corresponding to stages of processing along the ventral stream.

Results are largely consistent with expectations from previous studies, but the study is a good contribution because it replicates and generalises earlier findings. We are wondering whether more novel insights could be gained by empirically demonstrating the limitations of the model (feedforward, no motion or dynamic perception). This could be achieved by showing that the model does not explain all the explainable variance in the data and where in the brain the deep convolutional feedforward model falls short. Eventually, the field will need to compare multiple deep neural network models (including feedword models that take multiple frames as input, and recurrent models that can dynamically compress the recent stimulus history as biological visual systems probably do). 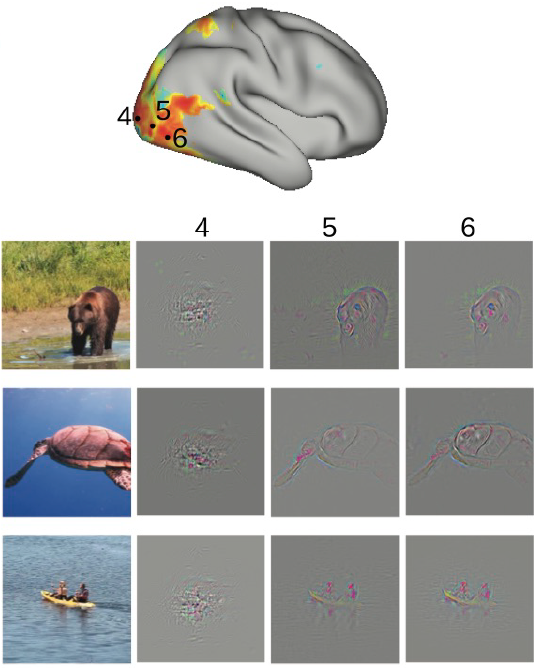 Figure: Visualising the image features that drive fMRI voxel responses in the context of particular images. Using the deconvolutional visualisation technique of Zeiler & Fergus on voxel encoding models (deep convolutional network + ridge regression), enables the authors to visualise to what extent adjusting pixels of a particular image (photos on the left) would change the encoding model’s prediction about voxel activity. Results shown here are for three voxels at different stages of the hierarchy. Voxel 4 has a localised central small receptive  field. Voxels 5 and 6 have larger receptive fields.

The paper demonstrates the functional alignment between the visual cortex and the CNN using a simple and effective method: each voxel’s time course during movie viewing is correlated with the output of each CNN unit when exposed to the frames of the movie (after convolution with a kernel to account for the delay and smoothness of the hemodynamic response). The highest-correlating units are then considered as matches. Note that this simple matching of each voxel to a set of units is easier to interpret than fitting a linear encoding model, which would have continuous weights spread over a large number of units. A disadvantage of simple voxel-to-unit matching might be that it doesn’t account for the averaging in fMRI voxels.

The authors correlated voxels with an output unit trained to detect faces. The resulting univariate brain map highlights face-selective regions, including the fusiform face area (FFA). We already knew that FFA responds to faces, and does so during natural vision (movies; e.g. work by Hasson et al.). We also know that CNNs can recognise faces. Putting these together, CNNs must be able to predict responses of the FFA to some degree. Indeed previous studies have already explicitly shown that CNNs explain variance in FFA (Khaligh-Razavi et al. 2014, Fig. S3b; Eickenberg et al. 2016). Being able to detect faces is necessary for a computational account of FFA, but it is not sufficient. We are left wondering whether the model can explain the FFA profile of activation within faces and within inanimate images (Mur et al. 2012) or the representational geometry within those two categories.

The authors used CNN units as nonlinear image features of ridge regression models of voxel responses. They logarithmically transformed the CNN outputs to model a saturating response that better matches the distribution of fMRI response amplitudes across images. They convolved the unit responses to movie frames with a hemodynamic response function to model the smoothness and delay of fMRI responses. As in previous studies, these models were tested for generalisation to novel stimuli (different movie segments here). They explained significant variance across large swaths of visual cortex.

The authors attempted to visualise the preferences of the FFA by presenting 20,400 images from the same 15 categories to the encoding model. These images were not used for training the deep net and were not part of the fMRI experiments used to train the encoding model. Of the 1,000 (out of 20,400) images, for which the FFA voxel’s encoding model predicted the greatest response, 90.4% were faces.

The authors then averaged the images most strongly driving the FFA encoding model. They state: “Strikingly, the average visualization showed a blurred but discernable picture of a human face (Fig. 3.c, middle). For the first time, this result provides the direct visualization of the highly face-selective functional representation at FFA.”

This result is not particularly compelling and invites incorrect interpretations. It reflects the known fact that FFA responds to faces (Kanwisher et al. 1997) and the central/frontal-view bias for faces in the image set used to make the visualisation. Visualising the FFA response as an image template misses the point of a deep hierarchy of nonlinear transformation: If an image template could characterise the response of FFA, multiple nonlinear transformations would not be needed.

To test for the necessity of multiple nonlinear stages, the encoding model could be replaced by a template matcher. More generally, model compression could be used to attempt to explain the FFA response with a shallower model. This might yield deeper insights into the computations underlying FFA responses.

Images and semantic categories can be decoded not only within, but also between subjects

The authors analyse to what extent encoding and decoding models fitted with one subject’s data generalise to other subjects. It’s good to have these analyses in the paper because they give us a more quantitative sense of the degree to which the anatomical intersubject alignment succeeds at matching up functionally similar responses. As expected, within-subject encoding and decoding predictions are more accurate, but generalisation across subjects does work somewhat.

The authors estimated multivariate regression models to predict time-varying feature maps of CNN layer 1 based on distributed cortical fMRI signals. Training was performed using an L1 (sparsity encouraging) penalty on the weights and random dropping out of a subset of the voxels during training with stochastic gradient descent. The layer-1 representation was then converted back to an image. As expected from previous studies (Thirion et al., Nishimoto et al., Miyawaki et al.) this works to some extent, highlighting regions of the image with high edge energy. The authors also decode semantic categories, which works quite well (again, not unexpectedly).

Points the authors may wish to address in revision

State clearly what data and criteria have been used to select voxels and ROIs whose results are shown (Figs. 2d, 3a, 3c, 7). Use independent data sets (1) for selection and ROI definition and (2) for estimating and plotting effects in the ROIs.

Inference must account for serial autocorrelation of fMRI time courses

Time points in fMRI are highly dependent, so cannot be considered exchangeable under H0. You could use prewhitening (e.g. the Cochrane-Orcutt method) or simulate a realistic null distribution by block permutation. Temporal block permutation could use long blocks and just enough of them to have a sufficient number of permutations. Some contexts where this applies are as follows:

It would be great to visualise the ways the deep convolutional encoding model falls short.

However, rectified linear units and max-pooling are noninvertible, image-dependent switches and “transpose as inverse” only provide approximations, and many dimensions are intentionally discarded across stages of the feedforward hierarchy. Please clarify these approximations and how they relate to (a) the goal of reconstruction of the image and (b) the goal to visualise the image features driving particular model responses.

Will data and code be available for other researchers to build on the findings?

Image reconstruction with error-flow from all layers

fMRI-like preprocessing of the CNN outputs

The authors take the logarithm of CNN outputs and convolve with an HRF model kernel peaking at 4 s latency. It would be good to know how this reasonable approach performs in comparison to other approaches, e.g. leaving out the logarithmic transform and/or estimating the HRF and its peak latency for each voxel (e.g. Pedregosa et al. pp2014).

In the encoding models, the weight regularizer is an L2 penalty (ridge regression), whereas in the decoding models it is an L1 penalty (LASSO).

There are some typos and minor grammatical errors (e.g. “in details” -> “in detail”).