Nakai and Nishimoto (pp2019) had each of six subjects perform 103 naturalistic cognitive tasks during functional magnetic resonance imaging (fMRI) of their brain activity.  This type of data could eventually enable us to more compellingly characterize the localization of cognitive task components across the human brain.

What is unique about this paper is the fact that it explores the space of cognitive tasks more systematically and comprehensively than any previous fMRI study I am aware of. It’s important to have data from many tasks in the same subjects to more quantitatively model how cognitive components, implemented in different parts of the brain, contribute in combination to different tasks.

The authors describe the space of tasks using a binary task-type model (with indicators for task components) and a continuous cognitive-factor model (with prior information from the literature incorporated via Neurosynth). They perform encoding and decoding analyses and investigate the clustering of task-related brain activity patterns. The model-based analyses are interesting, but also a bit hard to interpret, because they reveal the data only indirectly: through the lens of the models – and the models are very complex. It would be good to see some more basic “data-driven” analyses, as the title suggests.

However, the more important point is that this is a visionary contribution from an experimental point of view. The study pushes the envelope of cognitive fMRI. The biggest novel contributions are:

Should the authors choose to continue to work on this, my main suggestions are (1) to add some more interpretable data-driven analyses, and (2) to strengthen the open science component of the study (by sharing the data, task and analysis code, and models), so that it can form a seed for much future work that builds on these tasks, expanding the models, the data, and the analyses beyond what can be achieved by a single lab.

This rich set of tasks and human fMRI responses deserves to be analyzed with a wider array of models and methods in future studies. For example, it would be great in the future to test a wide variety of task-descriptive models. Eventually it might also be possible to build neural network models that can perform the entire set of tasks. Explaining the measured brain-activity with such brain-computational models would get us closer to understanding the underlying information processing. In addition, the experiment deserves to be expanded to more subjects (perhaps 100). This could produce a canonical basis for revisiting human cognitive fMRI at a greater level of rigor. These directions may not be realistic for a single study or a single lab. However, this paper could be seminal to the pursuit of these directions as an open science endeavor across labs.

Improvements to consider if the authors chose to revise the paper

In this conceptualization, an analysis could be low on both dimensions, restricting the data to a small set (e.g. a single brain region) and failing to bring theory into the analysis through a model of some complexity (e.g. instead computing overall activation in the brain region for each experimental condition). Being high on both dimensions, then, appears desirable. It would mean that the assumptions (though perhaps strong) are explicit in the model (and ideally justified), and that the data still richly inform the results.

Arguably this is the case here. The models the authors used have many parameters and so the data richly inform the results. However, the models also strongly constrain the results (and indeed changing the model might substantially alter the results – more on that below).

But an alternative conceptualization, which seems to me more consistent with popular usage of these terms, is that there is a tradeoff between data-driven and model-based. In this conceptualization the overall richness of the results (how many independent quantities are reported) is considered a separate dimension. Any analysis combines data and assumptions (with the latter ideally made explicit in a model). If the model assumptions are weak (compared to the typical study in the same field), an analysis is referred to as data-driven. If the model assumptions are strong, then an analysis is referred to as model-driven. In this conceptualization, “data-driven model” is an oxymoron.

“A sparse task-type encoding model revealed a hierarchical organization of cognitive tasks, their representation in cognitive space, and their mapping onto the cortex.” (abstract)

I am struggling to understand (1) what exact claims are made here, (2) how they are justified by the results, and (3) how they would constrain brain theory if true. The phrases “organization of cognitive tasks” and “representation in cognitive space” are vague.

The term hierarchical (together with the fact that a hierarchical cluster analysis was performed) suggests that (a) the activity patterns fall in clusters rather than spreading over a continuum and (b) the main clusters contain nested subclusters.

However, the analysis does not assess the degree to which the task-related brain activity patterns cluster. Instead a complex task-type model (whose details and influence on the results the reader cannot assess) is interposed. The model filters the data (for example preventing unmodeled task components from influencing the clustering). The outcome of clustering will also be affected by the prior over model weights.

It’s great that the decoding analysis generalizes to new tasks. But this requires model-based generalization. It would be useful, additionally, to use decoding to assess the discriminability of the task-related activity patterns in a less model-dependent way.

One could fit a linear discriminant for each pair of tasks and test on independent data from the same subject performing the same two tasks again. (If the accuracy were replaced by the linear discriminant t value or crossnobis estimator, then this could also form the basis for point (2) above.)

“A cognitive factor encoding model utilizing continuous intermediate features by using metadata-based inferences predicted brain activation patterns for more than 80 % of the cerebral cortex and decoded more than 95 % of tasks, even under novel task conditions.” (abstract)

The numbers 80% and 95% are not meaningful in the absence of additional information (more than 80% of the voxel responses predicted significantly above chance level, and more than 95% of the tasks were significantly distinct from at least some other tasks). You could either add the information needed to interpret these numbers to the abstract or remove the numbers from the abstract. (The abstract should be interpretable in isolation.) 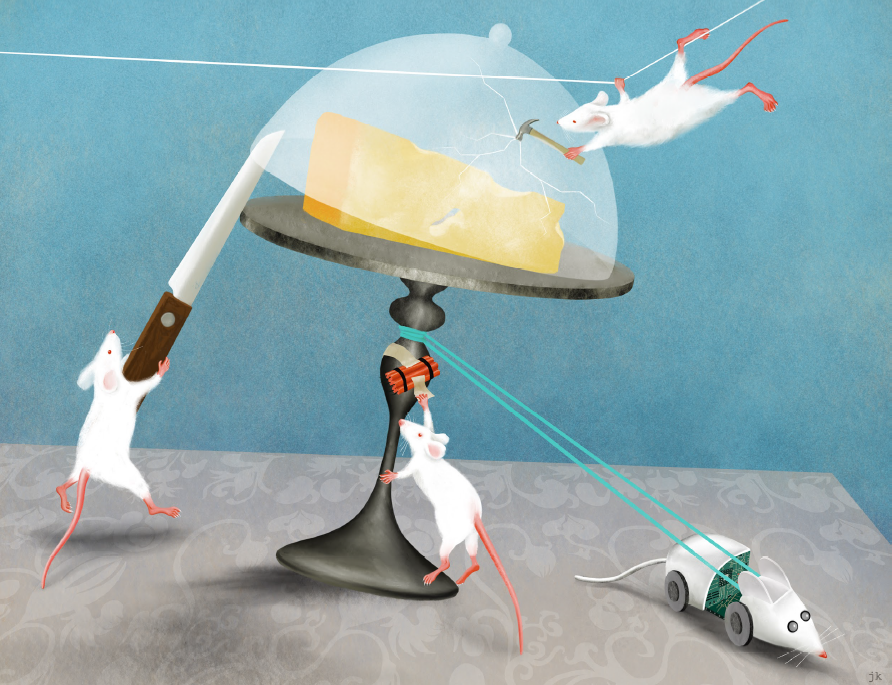 New behavioral monitoring and neural-net modeling techniques are revolutionizing animal neuroscience. How can we use the new tools to understand how brains implement cognitive processes? Musall, Urai, Sussillo and Churchland (pp2019) argue that these tools enable a less reductive approach to experimentation, where the tasks are more complex and natural, and brain and behavior are more comprehensively measured and modeled. (The picture above is Figure 1 of the paper.)

There have recently been amazing advances in measurement, modeling, and manipulation of complex brain and behavioral dynamics in rodents and other animals. These advances point toward the ultimate goal of total experimental control, where the environment as well as the animal’s brain and behavior are comprehensively measured and where both environment and brain activity can be arbitrarily manipulated. The review paper by Musall et al. focuses on the role that monitoring and modeling complex behaviors can play in the context of modern neuroscientific animal experimentation. In particular, the authors consider the following elements:

The paper provides a great concise introduction to these exciting developments and describes how the new techniques can be used in concert to help us understand how brains implement cognition. The authors focus on the role of monitoring and modeling behavior. They stress the need to capture uninstructed movements, i.e. movements that are not required for task performance, but nevertheless occur and often explain large amounts of variance in neural activity. They also emphasize the importance of behavioral variation across trials, brain states, and individuals. Detailed quantitative descriptions of behavioral dynamics enable researchers to model nuisance variation and also to understand the variation of performance across trials, which can reflect variation related to the brain state (e.g. arousal, fear), cognitive strategy (different algorithms for performing the task), and the individual studied (after all, every mouse is unique –– see figure above, which is Figure 1 in the paper).

Improvements to consider in case the paper is revised

The paper is well-written and useful already. In case the authors were to prepare a revision, they could consider improving it further by addressing some of the following points.

(1) Add a figure illustrating the envisaged style of experimentation and modeling.

It might be helpful for the reader to have another figure, illustrating how the different innovations fit together. Such a figure could be based on an existing study, or it could illustrate an ideal for future experimentation, amalgamating elements from different studies.

(2) Clarify what is meant by “understanding circuits” and the role of NNs as “tools” and “model organisms”.

The paper uses the term “circuit” in the title and throughout as the explanandum. The term “circuit” evokes a particular level of description: above the single neuron and below “systems”. The term is associated with small subsets of interacting neurons (sometimes identified neurons), whose dynamics can be understood in detail.

This is somewhat at a tension with the approach of neural-network modeling, where there isn’t necessarily a one-to-one mapping between units in the model and neurons in the brain. The neural-network modeling would appear to settle for a somewhat looser relationship between the model and the brain. There is a case to be made that this is necessary to enable us to engage higher-level cognitive processes.

The authors hint at their view of this issue by referring to the neural-network models as “artificial model organisms”. This suggests a feeling that these models are more like other biological species (e.g. the mouse “model”) than like data-analytical models. However, models are never identical to the phenomena they capture and the relationship between model and empirical phenomenon (i.e. what aspects of the data the model is supposed to predict) must be separately defined anyway. So why not consider the neural-network models more simply as models of brain information processing?

(3) Explain how the insights apply across animal species.

The basic argument of the paper in favor of comprehensive monitoring and modeling of behavior appears to hold equally for C. elegans, zebrafish, flies, rodents, tree shrews, marmosets, macaques, and humans. However, the paper appears to focus on rodents. Does the rationale change across species? If so how and why? Should human researchers not consider the same comprehensive measurement of behavior for the very same reasons?

Several authors have recently argued that behavioral modeling must play a key role if we are to understand how the brain implements cognitive processes (Krakauer et al. 2017, Neuron [cited already]; Yamins & DiCarlo 2016, Nature Neuroscience; Kriegeskorte & Douglas 2018, Nature Neuroscience 2018). It would be interesting to hear how the authors see the relationship between these arguments and the one they are making.