Rajesh Rao (pp2019) gives a concise review of the current state of the art in bidirectional brain-computer interfaces (BCIs) and offers an inspiring glimpse of a vision for future BCIs, conceptualized as neural co-processors.

A BCI, as the name suggests, connects a computer to a brain, either by reading out brain signals or by writing in brain signals. BCIs that both read from and write to the nervous system are called bidirectional BCIs. The reading may employ recordings from electrodes implanted in the brain or located on the scalp, and the writing must rely on some form of stimulation (e.g., again, through electrodes).

An organism in interaction with its environment forms a massively parallel perception-to-action cycle. The causal routes through the nervous system range in complexity from reflexes to higher cognition and memories at the temporal scale of the life span. The causal routes through the world, similarly, range from direct effects of our movements feeding back into our senses, to distal effects of our actions years down the line.

This immediately suggests a range of medical applications (Figs. 1, 2):

Beyond restoring lost function, BCIs have inspired visions of brain augmentation that would enable us to transcend normal function. For example, BCI’s might enable us to perceive, communicate, or act at higher bandwidth. While interesting to consider, current BCIs are far from achieving the bandwidth (bits per second) of our evolved input and output interfaces, such as our eyes and ears, our arms and legs. It’s fun to think that we might write a text in an instant with a BCI. However, what limits me in writing this open review is not my hands or the keyboard (I could use dictation instead), but the speed of my thoughts. My typing may be slower than the flight of my thoughts, but my thoughts are too slow to generate an acceptable text at the pace I can comfortably type.

But what if we could augment thought itself with a BCI? This would require the BCI to listen in to our brain activity as well as help shape and direct our thoughts. In other words, the BCI would have to be bidirectional and act as a neural co-processor (Fig. 3). The idea of such a system helping me think is science fiction for the moment, but bidirectional BCIs are a reality.

I might consider my laptop a very functional co-processor for my brain. However, it doesn’t include a BCI, because it neither reads from nor writes to my nervous system directly. It instead senses my keystrokes and sends out patterns of light, co-opting my evolved biological mechanisms for interfacing with the world: my hands and eyes, which provide a bandwidth of communication that is out of reach of current BCIs. 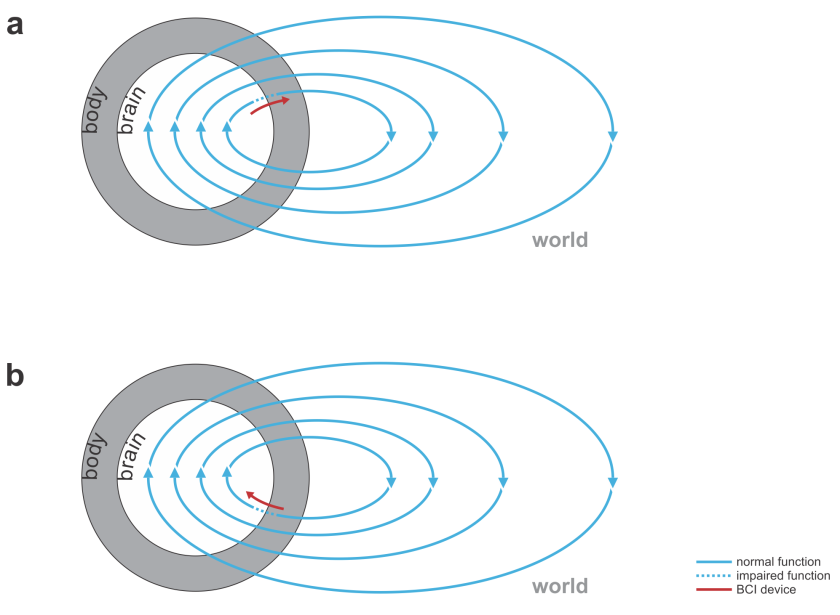 Rao reviews the exciting range of proof-of-principle demonstrations of bidirectional BCIs in the literature:

Most BCIs use linear decoders to read out neural activity. The latent variables to be decoded might be the positions and velocities capturing the state of a prosthetic hand, for example. The neural measurements are noisy and incomplete, so it is desirable to combine the evidence over time. The system should use not only the current neural activity pattern to decode the latent variables, but also the recent history. Moreover, it should use any prior knowledge we might have about the dynamics of the latent variables. For example, the components of a prosthetic arm are inert masses. Forces upon them cause acceleration, i.e. a change of velocity, which in turn changes the positions. The physics, thus, entails smooth positional trajectories.

For a perceptual BCI, similarly, the signals from the artificial sensors might be noisy and we might have prior knowledge about the latent variables to be encoded. Encoders, as well as decoders, thus, can benefit from using models that capture relevant information about the recent input history in their internal state and use optimal inference algorithms that exploit prior knowledge about the latent dynamics. Bidirectional BCIs, as we have seen, combine neural decoders and encoders. They form the basis for a more general concept that Rao introduces: the concept of a neural co-processor. 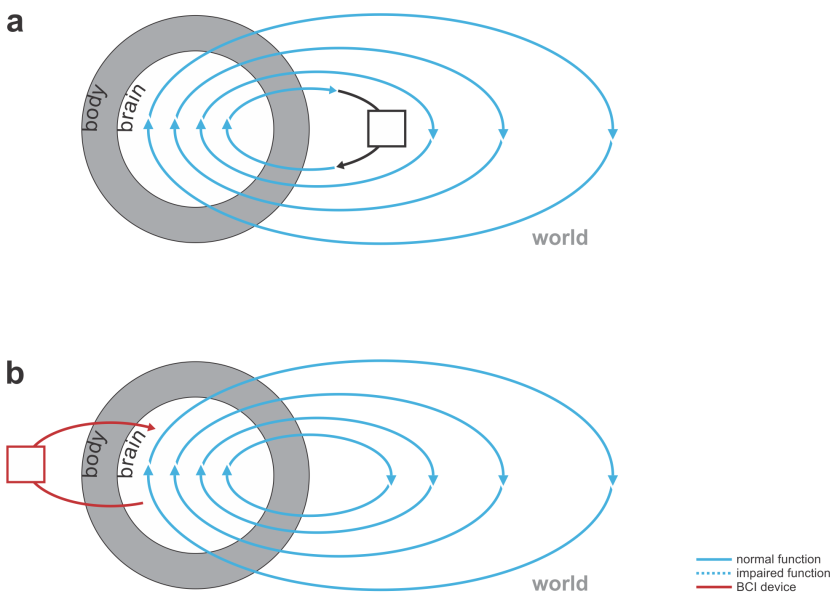 Fig. 3 | Devices augmenting our thoughts. (a) A laptop computer (black) that interfaces with our brains through our hands and eyes (not a BCI). (b) A neural co-processor that reads out neural signals from one region of the brain and writes in signals into another region of the brain (bidirectional BCI).

The idea of neural co-processors provides an attractive unifying framework for developing devices that augment brain function in some way, based on artificial neural networks and deep learning.

Intriguingly, Rao argues that neural co-processors might also be able to restore or extend the brain’s own processing capabilities. As mentioned above, it has been demonstrated that Hebbian plasticity can be induced via stimulation. A neural co-processor might initially complement processing by performing some representational transformation for the brain. The brain might then gradually learn to predict the stimulation patterns contributed by the co-processor. The co-processor would scaffold the processing until the brain has acquired and can take over the representational transformation by itself. Whether this would actually work remains to be seen.

The framework of neural co-processors might also be relevant for basic science, where the goal is to build models of normal brain-information processing. In a basic-science context, the goal is to drive the model parameters to best predict brain activity and behavior. The error derivatives of the brain or behavioral predictions might be continuously backpropagated through a model during interactive behavior, so as to optimize the model.

Overall, this paper gives an exciting concise view of the state of the literature on bidirectional BCIs, and the concept of neural co-processors provides an inspiring way to think about the bigger picture and future directions for this technology.

Improvements to consider in revision

The text is already at a high level of quality. These are just ideas for further improvements or future extensions.